– This page is constantly being updated. Please re-visit when you can.

The Farmers and Some Local History

Planning Events since 2016
– Developers Move In On Westridge Farm…

The Farmers and Some Local History 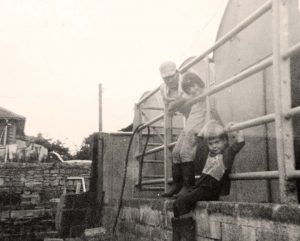 The Holliday family have been tenant farmers at Westridge Farm for over 50 years.

In 1966 Archibald Holliday and his wife Ruby relocated to the island from Liss in Hampshire with their two children Bernard and Michael.

They took over the tenancy at Westridge Farm, bringing with them their herd of Holstein Freisian cows from Mill Farm in Liss, Hampshire.

Bernard now age 77 still works on the farm today alongside his son Nigel.

Through the 60’s and 70’s A.B.Holliday milk from Westridge Farm was delivered locally with fresh farm eggs. May local residents still remember the Holliday family milk round to this day.

The land now occupied by Westridge Farm is recorded as having been farmed for centuries. 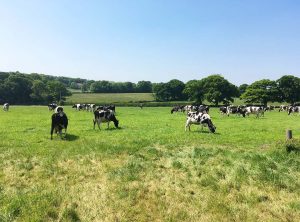 Back in the 1600’s the farm buildings at that time were located in exactly the same location as the current farm buildings, with the exception of the newest barn. The farmhouse that existed in the 1600’s was then called ‘The Old Cottage’ so was in existance long before then.

Historic archive documents record farming in the local area and the estate that this was part of as far back the 13th Century and the Doomsday Book.

As the Holliday family has done for the last 50 years, generations over centuries have tended this greenfield land and have valued it for the resource it truly is, a provider for both island residents and wildlife.

This habitat is so established and important with ancient hedgerows etc. that now rare species, some red listed and internationally endangered, inhabit or use it.

– Developers Move In On Westridge Farm…

Some of the following gives insight into the nature of the planning process that exists here on the Isle of Wight.

‘Save Westridge Farm’ was set up back in April 2016 to oppose the planning application of 80 homes on 11 acres of farmland at Westridge Farm near the farmhouse and milking parlour.

The community pulled together, the local Town Council unanimously supported rejecting the planning,  and in January 2017 plans were successfully rejected by the Isle of Wight Planning Committee with only one county councillor voting in favour of the application.

With barely time to celebrate this success the decision was ‘called in’ by the then head of Isle of Wight Planning Wendy Perera who issued a press release within hours calling the Councillor’s decision into question.

A second Isle of Wight Planning Committee meeting was held to look at the application again. During this meeting, after being informed by members of the public, it emerged that the Councillors on the committee who were to make the decision had not been fully informed of important relevant facts by the Planning Officer Sarah Wilkinson.

It was also brought to the attention of the IW Planning Committee Councillors by residents hours before the second meeting that the sole entrance and exit to the proposed development site was over land that existing neighbouring residential properties had a Right of Way over. Their Right of Way was over the entire width of the sole site access point intended to be used by the developers. This Right of Way was in deed and had been established and maintained for over a hundred years.

Hearing the above and other information that was revealed to the Councillors during this second meeting, the Isle of Wight Planning Committee were unable to make their decision and the meeting was adjourned for a further meeting to make the decision. Essentially the committee needed to be fully informed of the important relevant facts before making their decision.

A third Isle of Wight Planning Committee meeting was held in May 2017. There had been local elections between the second and third meeting and so Isle of Wight Planning Committee now had some new councillors on it. It is notable that some the new councillors on the committee, who had not attended the previous meetings for this application, voted in favour of the application without asking a single question about it.

Devastatingly planning permission for 80 properties was passed in the third Isle of Wight Planning Committee meeting by one vote.

Once the developers had got the permission to build 80, the number of properties the Planning Committee had been asked to decide on and give permission for, they then applied to have the number increased to 86.

This increase in numbers did not go back to the Planning Committee Councillors for them to consider again but instead was approved by the Planning Officer Sarah Wilkinson.

In September 2019 the developer unveiled further plans for 475 homes, the current planning application, which would completely destroy Westridge Farm.

In March 2020 the COVID-19 global pandemic effected us all. The building of the development paused as this industry was not critical to the COVID-19 response, whilst the Holliday family like all other farmers and critical workers were identified as key workers. Continuing to work through this pandemic to keep food production going in these uncertain times.

In July 2020 despite the uncertain times we still face due to COVID-19 the developer has submitted a planning application to the Isle of Wight Council for the now 475 homes!

The Holliday family have farmed the land at Westridge Farm since 1966 as tenant farmers. The Holliday family have been custodians of this land and have worked tirelessly for over 50 years, maintaining habitat and food production. Although loosing the 11 acres to 80 (now 86) property development, Westridge Farm has continued as a successful dairy farm.

The Holliday farming family will lose their home, livelihoods and everything they have worked for over the last 50 years if planning permission is granted for this development!

The Isle of Wight will lose forever the greenfield resource for its residents and the centuries old habitat providing for wildlife which includes many endangered or red listed species.

Please help us save the greenfields for both current and future generations.

– Once it’s built on it will be lost forever…

to SAVE WESTRIDGE FARM

– There is power in numbers.

to the PLANNING APPLICATION

This isn’t just a once in a lifetime opportunity…it’s once in many generations.

Once this precious habitat and land is built on it will be gone forever, never again available to future generations as a natural resource for the island and nature.

How do I submit a planning objection? CLICK HERE

This website uses cookies to improve your experience while you navigate through the website. The cookies that are categorised as necessary are stored on your browser as they are essential for the basic functioning of the website. We may sometimes also use other third-party cookies to help us analyse and understand how you use this website. These cookies will be stored in your browser only with your consent. You have the option to opt-out of these cookies, but opting out of some of these cookies may have an effect on your browsing experience.
Necessary Always Enabled
Necessary cookies are absolutely essential for the website to function properly. This category only includes cookies that ensures basic functionalities and security features of the website. These cookies do not store any personal information.
Non-necessary
Any cookies that may not be particularly necessary for the website to function and are used specifically to collect user personal data via analytics, ads, other embedded contents are termed as non-necessary cookies. It is mandatory to procure user consent prior to running these cookies on a website.
SAVE & ACCEPT